The year is ending, and I’m wrapping up some researching findings for publication. And some exciting news: once the new year starts I’m headed to NSLS-II to use the cutting edge submicron resolution spectroscopy beamline for some experiments on a brand new battery chemistry.

First I’d like to pause to reflect on what I’ve spent the last couple years on: shallow-cycled manganese dioxide (MnO2) as a cathode material. Specifically, why we need it:

These facts make it ideal for an emerging battery market, which is large-scale, grid-level battery storage for buffering solar and wind power. This storage market will be fundamentally different than the last major new market, which emerged in the 90s: that for portable computing and electronics. Portable computing requires high energy density, with cost and safety being secondary. In contrast, the planet-wide battery deployment needed for a green (i.e. solar) future will live and die on battery cost and safety, with energy density being secondary.

This leads to the almost in the title of this post: MnO2 is perfect for grid-scale battery storage (it even has high energy density) except its crystal structure breaks down at the end of discharge. This is shown in the X-ray diffraction data above. The three prominent MnO2 reflections shift to lower values of 1/d as the electrode discharges, because protons are inserted into the lattice causing it to expand or dilatate. Reaching the end of discharge, these reflections spread out and become dull (or somewhat amorphous) as other manganese oxides form, including the major discharge product groutite (α-MnOOH). Upon charge, groutite is converted back to MnO2, and the lattice shrinks as protons are de-inserted. We’ve gotten the MnO2 lattice back, but the problem is the “other” manganese oxides that formed at the end of discharge and are irreversible. Some reflections of hausmannite (Mn3O4) are now found in the electrode. Haumannite is highly resistive, and if too much forms, the electrode will fail. It doesn’t take many cycles. A few like this will do.

With funding from ARPA-E we developed a Zn-MnO2 battery that can cycle thousands of times, by limiting the discharge depth and not going all the way to 0.9 volts, as was done above. (That of course raises cost, but since zinc and manganese dioxide are cheap, the economics still come out in your favor.) Even then, we found that Mn3O4 (and its relative ZnMn2O4) still ends up forming around the MnO2 particles, giving them a resistive coating. Thankfully this doesn’t kill the battery, but it does mean there is a limit to how deeply you can discharge this way. However, by doing some very fundamental forensic-type experiments, resolving the manganese oxide crystal structures within undisturbed batteries, we learned something interesting. There are some important differences between the manganese oxides you see in operando (like those above) and the ones in a battery that has aged a while. In other words, the Mn3O4 seen above isn’t completely formed yet, and that suggests that perhaps its formation can be reversed, at least before too much time has passed. And that … is what we’ve been trying. Stay tuned for more on that. 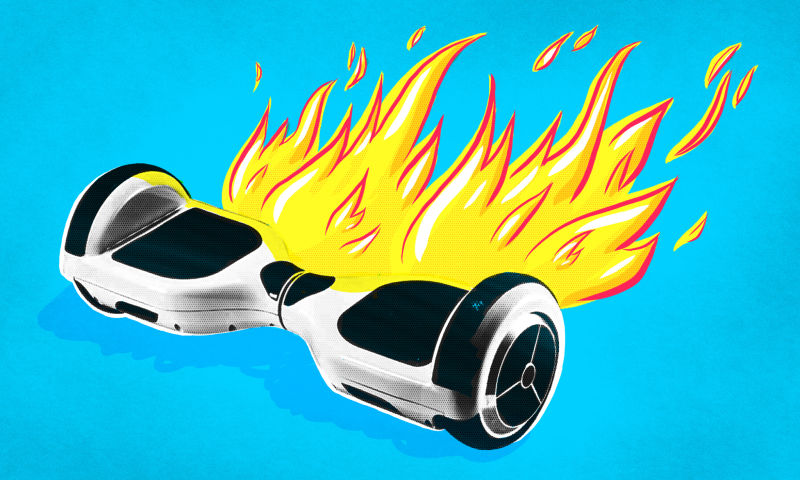 Gizmodo has a story up called Hoverboards Keep Catching on Fire and the Government Wants to Know Why. Certainly sounds like a lithium-ion battery problem, which is even what this guy said after his blew up.

Electrochemistry is fundamentally an interfacial science, dealing with reactions that happen at the interface between an electron conductor and an ion conductor. In many cases, including most practical batteries, this is a solid-liquid interface. Most batteries are consequently designed to be composed largely of interface. Often compressed particles of active material make up the electrodes and liquid electrolyte fills the pore space between the particles. The goal of battery engineering revolves around questions of either energy or power, and what value of these can be achieved in a device of a given mass, volume, or cost. Thus some metrics of battery success dealing with energy are: specific energy (Wh/kg), energy density (Wh/L), or capital cost ($/kWh). High specific energy is crucial for automotive batteries, while low capital cost is most important for large, stationary batteries at the building or grid scale.

Another fundamental feature of electrochemistry is that it by necessity involves the interplay of two electrodes, an anode and a cathode. Experimental techniques exist to test electrodes in isolation, but in practical devices such as batteries the electrodes usually interact. Device performance is determined not only by the performance potential of each electrode, but also by the effect of each electrode on the other. Because of this and the need to maximize interface, battery design is hierarchical (see fig. above): (i) active materials are chosen due to their voltages and rate capabilities; (ii) the active materials are formed into useful electrodes, which may have high surface area; (iii) the two electrodes are integrated into a device; and (iv) devices are connected (in series or parallel) to form a system, if needed.

This hierarchy requires specialized characterization at every level. There has long been an established toolkit for electrochemical materials characterization, but true device-level characterization is only now coming into its own as techniques are developed to collect microscopic data from within sealed batteries. Device-level knowledge beyond voltage/current (E/I) data is extremely powerful and promises to advance understanding into the complex mechanisms that occur inside cycling batteries. An overreliance on materials-level characterization ignores conditions arising from device-level aspects. One example is electrolyte concentration at the outer radius of a AA battery, which falls from its initial value during discharge, and is thus different than the same concentration in a D battery, which rises due to a much longer transport path to the anode. With materials-level characterization there is also the danger for a fallacy of composition, in which remarkable capabilities of the materials are inferred to the device without justification, based on a misunderstanding of battery design principles.