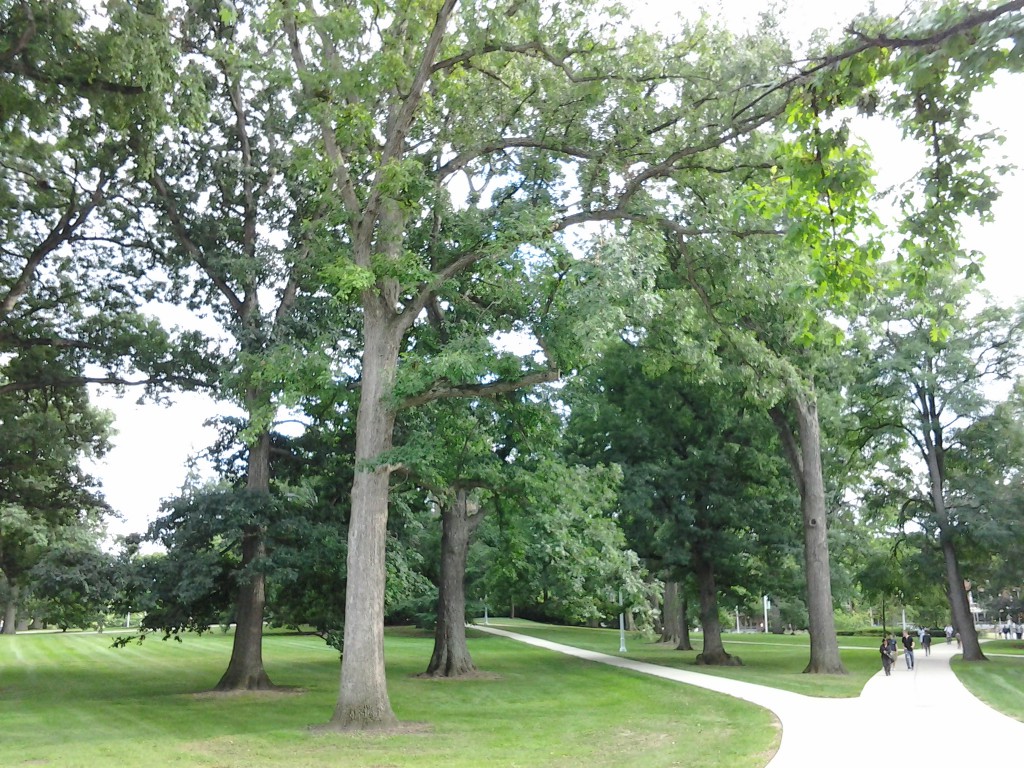 Just got back from giving a seminar at Michigan State University, which has the nicest, greenest campus. I called the talk “Batteries for Massive-Scale Electrical Storage: Using New In Situ Techniques for Electrochemical Systems.”

We had a reunion of some past members of the Scott Calabrese Barton group (pictured below). Leena and Hao both took time out of their busy schedules and drove in. We had a great time. (And the Soup Spoon Cafe was delicious.)

This summer we accomplished a lot of further data analysis from a collaboration with researchers at Brookhaven National Lab. We’ve been using cutting edge tools there to identify the materials inside batteries without opening up the battery case, exposing the electrodes to air, or even getting dirty. We published a preliminary paper earlier in 2014, but there is still quite a bit to learn.

You do this using a technique called EDXRD (or energy dispersive X-ray diffraction). You shine X-ray light with very high energy and very high intensity through the battery. This is called a “white beam” because it has a wide spectrum of wavelengths in it. (That basically means many different “colors” of X-rays. And light with all the colors in it is called “white.”) Some of the light is diffracted by the regularly-occuring patterns of atoms in the battery electrodes, and you set up a detector outside the battery (and several feet away) to measure how much light of each wavelength gets diffracted. Since you’re several feet away and aligned very carefully, you know everything you’re learning pertains to a very small “gauge volume” inside the battery. (In the above cartoon it’s enlarged many times to make it easy to see, but it’s actually cubic microns in size.)

By moving the battery around using a precise x-y-z stage, you can “look around” inside it and see what materials are at every location, provided they’re crystalline enough to diffract X-rays.

Take for example a basic rule about batteries: if you discharge them faster you will reduce the capacity you get out of them. The plot above shows discharge curves for two AA alkaline batteries. At a high drain rate of 571 mA you get about 1.7 Ah from the cell, while at 18.1 mA you get double that, about 3.4 Ah. The interesting thing is that these two batteries have entirely different material compositions inside them after discharge. In fact, if you do six different rates, you will get six batteries with six different material profiles in the electrodes. Using a powerful tool like this, you can begin to figure out the extremely complex set of reactions that happen during discharge, which are, believe it or not, largely unknown.